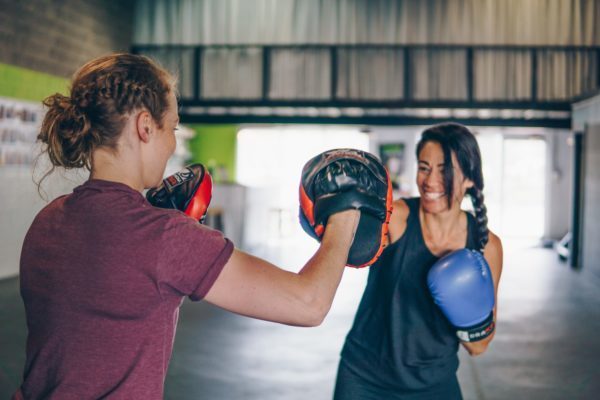 Posted at 14:37h in Injuries, News, Shoulder by Peter Hogg

Serratus anterior is an important muscle for the overhead athlete. Dysfunction in this muscle can lead to shoulder injuries such as impingement, rotator cuff breakdown and performance decrements during overhead tasks. Chris Mallac looks at its anatomy and biomechanics, and highlights some clinically relevant
exercises designed to retrain serratus anterior function.

Shoulder pain is a common complaint in overhead athletes involved in sports such as swimming, tennis and the throwing sports. Overhead upper extremity movements place incredibly high demands on the shoulder complex, requiring high muscular activation around both the scapula-thoracic joint and glenohumeral joint.  Researchers have reported that abnormal biomechanics of the shoulder girdle and repeated overhead
movements can lead to injuries in overhead throwing athletes (1) .

In particular, muscular imbalances around the shoulder complex in the form of altered activation patterns and inherent myofascial restrictions, may lead to diminished scapular control and dyskinesis resulting in glenohumeral joint injuries, such as instability and impingement (2) .  The serratus anterior (SA) is one of the scapula muscles that provides a link between the shoulder girdle and the trunk and has often be implicated as a dysfunctional muscle in shoulder pathologies (3,4) . The SA is a prime mover of the scapula, contributing to the maintenance of normal scapulohumeral rhythm and motion (4) . It has large moment arms to produce upward rotation and posterior tilting due to its insertion on the inferior and medial border of the scapula. Poor activation of the SA muscle may result in reduced scapular rotation and protraction, resulting in relative anterior-superior translation of the humeral head in relation to its glenoid articulation, causing subacromial impingement and rotator cuff tears (5) .

The SA is a flat sheet of muscle originating from the lateral surface of the first nine ribs (see figure 1). It passes posteriorly around the thoracic wall before inserting into the anterior surface of the medial border of the scapula (6) . Overall, the main function of the SA is to protract and rotate the scapula, keeping it closely opposed to the thoracic wall allowing optimal positioning of the glenoid fossa for maximum efficiency for
upper extremity motion (7) . The SA can be broken down into three functional anatomical components (8,9) :

1. The superior component originates from the first and second ribs and inserts into the superior medial angle of the scapula. This component serves as the anchor that allows the scapula to rotate when the arm is lifted overhead. These fibres run parallel to the 1 st and 2 nd rib; 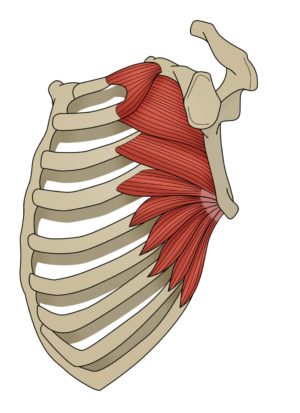 The primary functional roles of the SA are to(9):

In the athlete, particular specific movements require a high level of function of the SA to achieve either full scapular protraction and/or upward rotation. Examples of athletic endeavours requiring this SA function include:

The SA is innervated by the long thoracic nerve, originating from the anterior rami of the fifth, sixth, and seventh cervical nerves (see figure 2)(7,8). Branches from the fifth and sixth cervical nerves pass anteriorly through the scalenus medius muscle before joining the seventh cervical nerve branch that courses anteriorly to the scalenus medius. The long thoracic nerve then dives deep to the brachial plexus and the clavicle to pass over the first rib. Here, the nerve enters a fascial sheath and continues to descend along the lateral aspect of the thoracic wall to innervate the SA muscle. 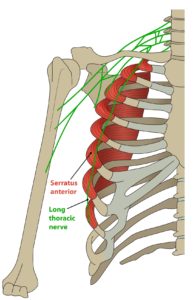 Proper positioning of the humerus in the glenoid cavity, known as scapulohumeral rhythm, is critical to the proper function of the glenohumeral joint during overhead motion. A disturbance in normal scapula movement may cause inappropriate positioning of the glenoid relative to the humeral head, resulting in injury such as impingement and instability(2,12,13). Precise timing of muscle activation and adequate levels of muscle recruitment are also needed to position the scapula in the ‘ideal’ position. Small changes of activation in the muscles around the scapula can affect its alignment, as well as the forces involved in upper limb movement(14). One of the primary muscles responsible for maintaining normal rhythm and shoulder motion is the SA(15).

Clinically, it has been shown that if a therapist actively repositions a patient’s scapula into an ‘ideal’ posture by reducing the anterior tilt, then it is noticed that impingement pain is reduced, and strength increases in the shoulder during overhead activities(16). The SA is a muscle that will actively work to position the scapula into posterior tilt during overhead activities.

Lack of strength or endurance in the SA allows the scapula to rest in a downwardly rotated and anterior tilted position, causing the inferior border to become more prominent. Furthermore, gross pathological inhibition of the SA or an imbalance between the SA and the other protracting muscle, the pectoralis minor, may result in a ‘winging scapula’. Scapular winging may precipitate or contribute to persistent symptoms in patients with orthopaedic shoulder abnormalities(17,18).

This scapular winging is best appreciated on watching the scapula posture during a push up exercise. Often if the winging is due to a muscle imbalance and the primary scapula stabiliser is the pectoralis minor, this will usually correct if the patient is asked to ‘plus’ and protract the scapula. If the wing disappears then the cause is most likely muscle imbalance, if it remains then it may be a pathological inhibition of the SA. Examples of this are shown below in figures 3-6. 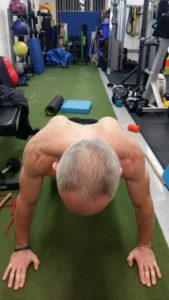 Figure 4: Winging corrects on execution of a ‘plus’ 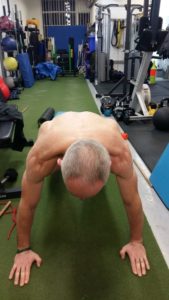 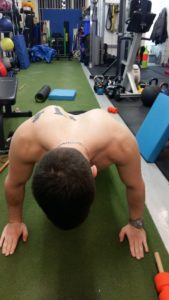 Figure 6: Left scapula corrects with ‘plus’ however note the right is still winged 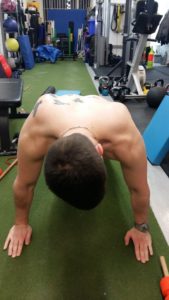 The gross examples of scapular winging can also be due to a pathological lesion to the long thoracic nerve that innervates the SA muscle. For the purposes of this discussion, direct nerve insults to the long thoracic nerve will not be discussed as often these injuries will seriously curtail athletic participation in an athlete. The reader is directed to references 19-23 for a more detailed discussion on these pathological nerve lesions.

The importance of a conditioned serratus anterior muscle has been highlighted in EMG studies of sports such as swimming(24), throwing(25), and tennis(26). A fatigued serratus anterior muscle will reduce scapular rotation and protraction and allow the humeral head to translate anteriorly and superiorly, possibly leading to secondary impingement and rotator cuff tears(27). More direct studies on the role that SA plays in shoulder pathologies has been studied by other researchers. The pertinent points of some of these studies can be summarised below;

Scapula position has also been associated with the ability of the rotator cuff to function. Excessive anterior tilt of the scapula, internal rotation, or excessive elevation of the acromion are factors that decrease the rotator cuff activation and cause an inadequate distribution of tension along the tendons. Such situations impair the optimum length-to-tension ratio of these muscles, leading to a loss of stabilisation and increasing the chance of muscular disruption or degeneration(32). It has been shown that the rotator cuff function improves in the presence of functioning scapula muscles such as the SA and lower trapezius.

A significant amount of research has been conducted on finding the best rehabilitation exercises for the SA. The majority of these studies look at movements such as push ups, push up-plus exercises, cable and dumbbell ‘punch’ type movements. These exercises essentially emulate the function of the SA in its protraction role.  Some of the findings of the more noted studies are;

Below are some examples of clinically used SA activation exercises that anecdotally seem to recruit SA to high levels of function:

The wall slider (figures 7a and 7b) 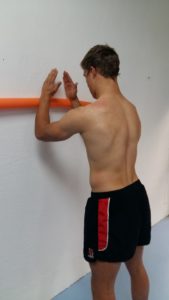 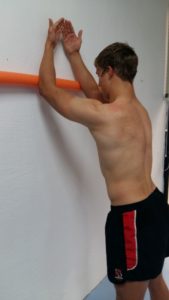 (notice the forearm is supinated and shoulder externally rotated)

a. Hold a Swiss ball (55cm) between the arms with the ball gently resting on the chest and the forearms in neutral pronation/supination.
b. Slowly rotate the trunk to the left. As this is done, the right arm is made longer by actively protracting the scapula and the left arm is made shorter by actively retracting and depressing the scapula. The arms ‘glide’ around the Swiss ball.
c. As the arm is made longer (protraction) slowly rotate the palm upwards to encourage supination of the forearm and external rotation of the shoulder.
d. Return to the start position and commence again.
e. This can be progressed by holding Theratubing in the hands, which wraps around the upper trunk. This provides resistance to the scapula protraction. 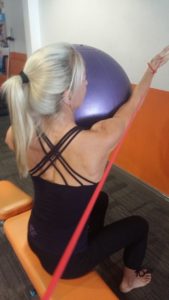 (notice the hand is turning into supination)

3. TrX Serratus rollouts (figures 9a and 9b) 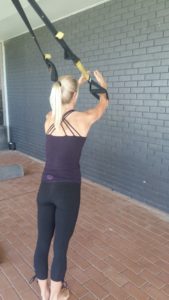 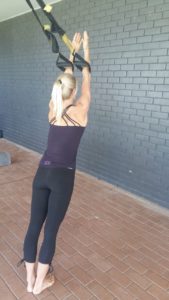 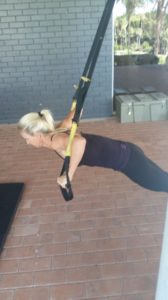 Figure 10b: TrX push up plus (finish position) 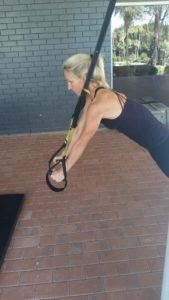 The serratus anterior (SA) is a muscle that plays an important role in the dynamic movement and control of the scapula during pushing movements and overhead elevation. Specifically it is a protractor, upward rotator, posterior tilt muscle of the scapula and additionally it fixes the scapula against the rib cage during movement. It is an important muscle for the overhead athlete as dysfunction in this muscle can lead to shoulder injuries such as impingement, rotator cuff breakdown and performance decrements during overhead tasks. This article has highlighted some clinically relevant exercises designed to retrain SA function in the athlete with SA dysfunction.

Have a question? Ask the guru...
Ask now
Book an appointment